Finally, I’m back to write the 3rd section of Robyn Stunts Rewind! First, you guys heard about how I got into stunt riding, then you learned about how I set my bike up to stunt! Now, I’m going to talk about my first few stunt sessions. I’ve gotten a lot of questions about starting out, so this will tell you about how I did when I first started poppin wheelies. After I explain how I went about things, I’ll let you know why what I did wasn’t the best idea and what I recommend.

My first couple of sessions were in early June of 2011. Still truckless and trailerless I thought it would be a great idea to just register my bike and ride it to the spot! So, I showed up at my first lot session on my bike. I pulled up to the over crowded lot and sat and watched for a while, then decided I wanted to ride. I was afraid to get in the way, so I did what any new stunt rider and current street rider would do…I took my bike for a ride on the streets haha. When I got back to the lot after my hour long cruise, the traffic in the lot had died down a little. It was time. With some advice from my friends “give it throttle and pop the clutch” I was on my way. The nerves set in. Thoughts like “what if I break something on my bike” and “what if I look like an idiot” ran thru my head. I rode back and forth up and down the lot giving it gas and poppin the clutch. The tire barely came off the ground. I was embarrassed. I was tired. I decided to go home.

A couple of things went thru my head that night about why my lot session was a total fail. I decided for my next session #1, I would not ride my bike to the lot. #2, I would not go to a crowded lot sessions with a bunch of people I don’t know. #3, I would swallow my pride and admit to all the guys that I was scared and I had no idea what I was doing. I would ask one of my closer friends to help me and really break it down for me.

Lot session #2 rolled around and I was lucky to have a loaner truck to truck myself to the session. Off I went. Now I didn’t have to worry about breaking my bike. I showed up and (with some help) unloaded my bike. Mental note, learn how to load and unload your own bike Robyn. Check, check. Noted. This was something I made sure I learned right away. After I was unloaded and all geared up, I talked privately to one of my friends. The convo went something like this:

Whew, once I got that out of the way, things got easier. He broke it down for me in girl language and gave me a few tips on what to do such as clutching up at a stand still vs rolling, what to set my tire pressure at and what to set my idle at. Who would have thought you had to do these things. I had no clue. After our talk I was feeling well informed and on my way to ride some killer wheelies. Only, once again, my tire hardly came off the ground. Maybe a foot at most and it was SCARY. After an hour, I was exhausted, stressed, frustrated and still borderline scared of these things called wheelies. I rode over to my truck and parked my bike. 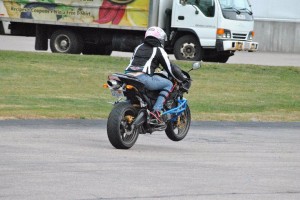 Another rider, Chris Matattal came over and suggested I try to ride his 70cc dirtbike. He explained how riding a 600 to start can be a bit intimidating and that the 70 would help me to feel more comfortable. I got on his 70 and applied what I had learned. What do you know…I did a wheelie! It wasn’t a good one, but it was a wheelie. Then I did it again, and again. I crashed. I laughed. I smiled. I was having so much fun. Jumping right on the 636 clearly wasn’t the best way for me to start. I rode his 70 on and off the rest of the day. When I loaded up and headed home for the day, I knew a 70 or a 50 was just what I needed. That week, I went out and bought a 50 and decided after 2 sessions to take a short break from my 636.

Next time, read about how learning the basics on a 50 helped!