Hey Guys! Now that you know how I got into stunt riding, I’m going to tell you about what bike I picked up for my first stunt bike. I’m also going to talk about how I set my bike up to stunt. Keep in mind at this point I was a beginner and knew very little about stunt riding.

Spring 2011: My first stunt bike, and the bike I still stunt today, is an 06 Kawasaki 636.  It looks much different now than it does when I first picked it up, as you can see. Like I said in the last “Robyn Stunts Rewind“, I got this bike solely due to the fact that the deal was too good to pass up! I didn’t know any of the pros and cons about different stunt bikes, or if a Ninja was a good choice for me. My new bike bike was 100% stock and in mint condition other than some cosmetic damage from the original owner going down on the streets. 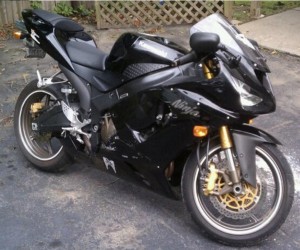 When I got my bike home, the first thing I did was take off some of my fairings. I took off the sides, lowers and all small inserts so they wouldn’t get destroyed. I also ended up selling them to get some money so I could buy more stunt parts.

Next, I put on a stunt cage to protect my bike’s engine, frame and other parts from hitting the ground. The cage was given to me with the bike and it was a used first generation Sick Innovations cage. I had also ordered a new chain and a 54t sprocket, which is up 11 from the stock 43t on an 05/06 636. I went with a 54t based off of advice from my friends. I told them I wanted to go in the middle of aggressive tall parking lot gearing and smaller street rider gearing. After I changed my sprockets, the last mod was to change my clips on. I flipped my clip ons upside down and put them on opposite sides to give them a little more height for more comfort during a wheelie.

As a finishing touch and to give my bike some character, I named my bike “Lancer” after a “My Little Pony” character. For those that didn’t know, I grew up riding horses. By giving my stunt bike a pony name, in my mind, it was like I was riding both at once haha.

At this point, I was ready to stunt my bike…or so I thought! Boy did I have a lot to find out.

Next time, hear about my first couple of stunt sessions on Lancer and why I decided to go back to the drawing board on this whole stunt riding thing.