My Brother and I In Super Streetbike Magazine – 10 Years Apart 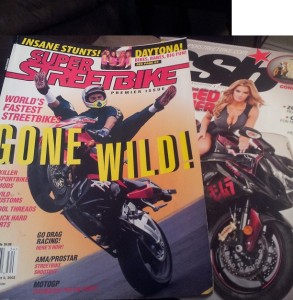 In 2003, my brother Mike was featured in Super Streetbike Magazine. He was down in Florida for bike week. It was rainy and shitty out, and none of his friends wanted to ride with him. He was dared to go out and wheelie in a thong if he wanted to ride so bad. He is not one to turn down a dare to do something crazy. His funny wheelies and full moon burnouts landed him in the magazine. 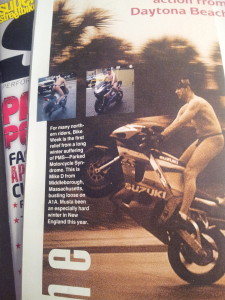 For those that do not know my history, in 2003 I did not ride anything except horses. I had never swung my leg over a motorcycle. I was just a fan who thought my brother was such a badass. I look up to him a lot. He is the reason I wanted to learn to stuntride. In 2011 I got my first stunt bike.

10 years after him, here I am in 2013 in the same magazine, Super Streetbike Magazine, winning a contest from SSB and Speed and Strength. 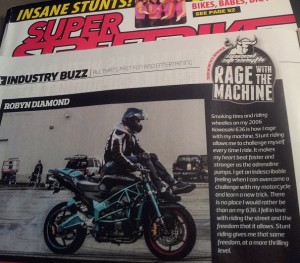 I found both of these magazines while packing for my big upcoming move cross country to California. It was really neat to look at the magazines side by side. I never would have thought in 2003 that I would be in the same magazine as my awesome big bro! Today is also Mike’s birthday. Happy Birthday big brother!! <3 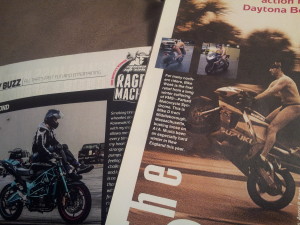 One Response so far.